I like numbers. I have a semi-pathological obsession with numbers. Numbers, unlike words, never lie. You may be able to misrepresent them, which takes words, but in and of themselves they are true to the nature of their representation. Numbers prove words true. Applied mathematics makes sense out of life, for the most part. Theoretical mathematics are just plain fun. “What is” versus “what could be”. Hence, my obsession with lap times, mostly my own, rather than anyone else’s.

I’m a very competitive individual. When I’m lacking decent competition I will compete with my own self. Decent competition here is defined as competing with racers who are at similar skill levels to my own, preferably on the faster (or better) side of things. An easy win isn’t anything for me to aspire to. I do like easy wins, don’t get me wrong; but “cherry-picking” my way around the competition just doesn’t feel nearly as good as that win you’ve earned. The win you’ve fought so hard for, you weren’t sure if you’re going to make it, and in doing so scared yourself on several occasions because you were giving 110%, pushing the envelope way past your personal comfort zone. I like those. Those are awesome! That’s the stuff a great story is made of. A story worth telling. A story worth reading. An inspiration; the fuel that keeps the flame alive and burning brightly. Coincidentally, those are also the races that will be remembered: the nail-biting, edge of your seat, heart-pounding close ones. Good times! Good times!

It would be utter nonsense to compare my “PR” of the best lap I ever turned at Barber Motorsports Park with that of Mat Mladin, who currently holds the track record of 1:23.664, with an AVERAGE speed of 115.474 miles per hour. I barely haul that on the front straight, never mind averaging it. Not even close. If I could get into the upper 1:40s consistently I’d be holding a press conference. My PR for Barber is 1:52. And that is NOT my consistent average.

Here’s a word problem for you:

“If Mat and Em left pit road and entered the track at the same time and there was no other traffic, where on the track would the lapping pass happen and at what time in the race?”

I give you a hint: When Kevin Schwantz crosses the finish line on a Saturday afternoon sighting lap with no brakes, Em is still trying to figure out whether or not to shift on top of the curb or before it, even though it really doesn’t matter either way at her current speed or the gearing she’s running, not that she would have to shift at all if she didn’t want to.

Another hint: She wouldn’t see Mat again, short of catching a quick glimpse of him heading out of Turn 6, once he disappeared from view in the middle of Turn 3, until she was unceremoniously lapped a shortish while later.

I try not to make it a habit to keep tabs on my competition. An activity, a friend of mine calls “lap time stalking”. She says it helps her confidence to know what she’s up against beforehand. I rather not know how I stack up against others. It becomes self-evident once you’re on the track with them. You either know wether or not you have a chance to keep up and possibly even have a chance at beating them. If they pull away from you like the newbie equivalent of Mat Mladin in my silly example, you might as well pick on somebody your own size… I mean, speed.

The same also holds true if the roles were reversed. It wouldn’t be any fun for me to pass another rider who runs in the 2:20s at the aforementioned racetrack. It’s boring and uninspiring, just like Mat would feel about my hanging out in the raceline with him. Non-consequential at best, a liability at worst, and an inconvenience every third lap or so. Like a sprint runner passing the fitness walker at the gym’s indoor track.

The stalking of lap times has the opposite effect on my psyche. If I had known what kind of times the boys were handing in during my first race weekend, I would have stayed home; not that I left the house thinking that there was even a remote possibility of me winning anything. I just wanted to do it and be part of something fairly unique. I headed to the racetrack with only one goal in mind: I didn’t want to come home with a DNF (Did Not Finish) or, worse, a DNS (Did Not Start). The former meaning I probably crashed out, and the latter meaning I didn’t have the courage to grid up for the race in the first place.

That’s also my attitude about running in my first half marathon. I’m not entertaining any notion that I’ll be winning anything. I just want to say that I did it and crossed the finish line under my own power.

However, this didn’t stop me from trying to figure out where (and how fast) I would finish and where I could finish in my ultimate goal, which is completing an official marathon. On my quest to comparing the “what is” with the “what could be” I came across this nifty little tool. The runner’s (free) equivalent of the motorcycle racer’s (expensive) data acquisition: Greg McMillan’s pace calculator.

I plug in my PR of 30:00 for the 5K, which just so happens to give me the best projected outcome and furnishes me with all sorts of digits I can use in my marathon training. You can try it for yourself here. 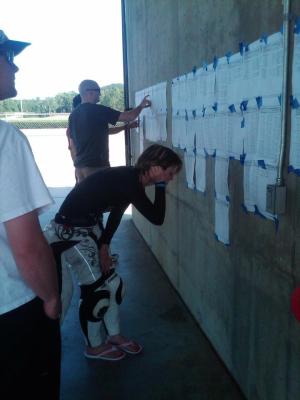 Caught in the act by my daughter (I think she was trying to report on a heinous fashion crime though): At Barber Motorsports Park looking at posted lap times and race results.

Who said theoretical mathematics couldn’t be fun? Probably the same person who also insists that playing around with applied physics wasn’t a pleasurable activity. Talk to me once you’ve put your knee down for the very first time cornering your motorcycle or have set a new personal best for the mile in your run. We will then revisit the subject of “speed is relative” and can be enjoyed on any level, as long  as you have a grasp on what the accomplishment means to you personally.

I will never complete a lap in the 1:23s at BMP, nor will I ever complete a marathon in the 2:15s. What I will do, however, is be inspired to reach for my own personal best, by working hard and not giving up when things seem to get too tough; and enjoy my triumphs and be proud in my accomplishments, no matter how they may compare on a broader scale.

There is always somebody faster.

Just do it and be your best. Discouragement is highly discouraged. And discouragement happens when you compare yourself to others, especially to those (way) out of your (current) league. Don’t compare, but compete. And competition happens when you find someone who’s at your own level… and then the real race begins. The one you have a possibility of winning. The one that happens with the person directly in front of you. Let them inspire you to give it your all and then give a little more; and as you pass them, you’ll inadvertently do the same for them.

And that is where it’s at.

Chances are you’ll end up pulling each other along to the finish, crossing the line together in an impromptu team effort towards a common goal.

Chances are that the motorcycle you’ve been chasing and trying to hopefully pass for the better of five laps, inspired you to go faster than you ever have and you’ll still end up doing the happy dance in front of the posted race results, looking like a complete dork, even though you’ve finished the race in the back of the pack. 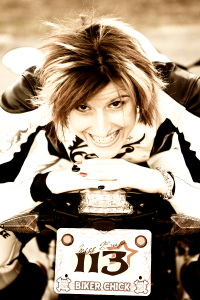